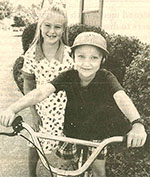 Eye Examination Saved Templeton Girl’s Life
“On November 16, 1994 Staci and the rest of the first-grade class at Templeton Elementary School were given a routine vision screening, the sort that all districts in the area provide with the help of local eye doctors and service clubs. The screening indicated that Staci, who was 6 at the time, was near-sighted and needed a complete eye exam. Staci’s parents took her to Dr. Rena Stathacopoulos in San Luis Obispo…and discovered a tumor in Staci’s pineol gland located at the back of the brain. How does a parent know if his or her child needs more than glasses to correct a vision problem? Stathacopoulos recommends that every child between the ages of 3-6 have at least one complete exam by an eye care professional.” – Scott Steepleton, Country News-Press. Click here to read full story.

FIRST 5 Community Report: Vision Screening Program Highlights
“Just 2 weeks ago, I saw a North County kindergarten teacher in my office and we discussed the ongoing program to screen children 0-5 in San Luis Obispo County. She stated that prior to our program, many kids entered kindergarten ill equipped to learn because of undiscovered vision problems. She has noticed far more children already under care by the time they reach her class, and that both she and her colleagues send their deepest gratitude to us and the Proposition 10 Commission for our efforts.”

“One four-year-old child was thought to have autism until it was determined he had a profound vision deficit at one of our screenings. Since getting his glasses, teachers report a complete turn-around in social skills and school performance.” – First 5 Community Report

Lions Club Helps School Children See Well
“Major stressed it is important for parents to seek a full vision examination if their child is referred. ‘The screening criteria used have been shown to be more than 90 percent accurate,’ he said. Last year, of almost 7,000 children screened countywide, 621 were referred for further testing. ‘Unfortunately,’ said Major, ‘about 200 of those kids received no further care. Parents need to be aware of the impact visual skills have on class performance,’ said Major.” –Telegram Tribune. Click here to read full story. 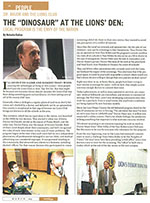 Local Program is the Envy of the Nation
“Generally, when a child gets a regular physical (and many don’t), her vision isn’t checked by a doctor and definitely not by an optometrist. Our county is exceptional in that regard because our Lions Club brings eye doctors to all the schools in the area.” – Natasha Dalton, SLO Journal. Click here to read full story. 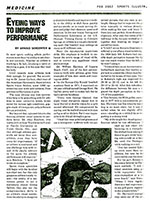 Major Study Discovering Need for Eye Exams
“Of the nearly dozen children that Major found with vision problems at Templeton Elementary School, however, eight had previously been screened by their pediatrician. So far Major has found that six to seven perfect of the children he tests have some sort of vision problems that needs to be corrected. The earlier vision problems are found the more easily they can be treated. While some pediatricians do a very good job of testing vision, he said most don’t do a thorough enough examinations because it is not their specialty.” – Marianne Danner, Country News-Press. Click to read full story.